Sugar beet (Beta vulgaris L.ssp. vulgaris var. Altissima Doell) is cultivated world-wide, but primarily in moderate to temperate climates with sufficient rainfall. In the Northern hemisphere the growers are Europe (including Russia), USA, Canada, China, and Japan. In the Southern hemisphere the only grower is Chile. Today’s sugar beets have a sucrose content of approx. 15 – 20 % depending on climate, soil type, variety and cultivation methods.

The worldwide growing area for sugar beet is about 7.5 million hectares and the annual production of sugar beets is about 225 million tons. The leading producing European countries are France, Germany, United Kingdom and Russia. Only about 20-22% of all sugar produced worldwide is from sugar beets, with the majority originating from sugar cane.

By-products from sugar beet processing e.g., beet pulp and molasses, are the main sugar beet products fed to animals. Sugar beet pulp is effectively used in ruminant feeding due to its high fibre content (up to 25 % in the dry matter). It has the potential to replace significant quantities of cereals in concentrate mixtures for dairy cattle. Incorporation rates of 30 % in the dry matter of diets for dairy cows and 50 % for beef cattle are possible.

The limiting factors of the by-products from sugar processing are the low protein content and the high content of fibres, which are known to have a low efficiency of energy utilisation in monogastrics like for example pigs. Additionally, a high concentration of highly fermentable substances (sugars) might negatively affect rumen fermentation. Effects of specific ingredients (undesired substances and anti-nutrients) on animal health or on meat and milk quality are not known.

For processing, the beets are first washed with water to remove dirt and other large debris, and then they are sliced into cossettes. The cossettes are extracted with water at temperatures around 70°C for about 100 minutes. The raw juice obtained is purified by a treatment with milk of lime and carbon dioxide. The resulting material, the carbonation sludge, is removed by filtration and pressed as carbonation lime. The resulting juice is called “thin juice”. The “thin juice” is concentrated by evaporation to thick juice. The evaporation is carried out in multi-stage evaporators working at a temperature range of 98-130°C at different pressures. The resulting “thick juice” is further concentrated to crystal magma from which crystalline sugar is recovered by centrifugation.

During the centrifugation process, the crystals are separated from the syrup. The crystals are dried, cooled and stored for further use. The remaining syrup, the so-called molasses, is mainly used as animal feed or as fermentation substrate. The recovery of residual sucrose from molasses is done in some regions, but not extensively. The material remaining from the treated cossettes is referred to as wet pulp. This pulp is pressed and dried to remove water and is commonly pelleted with added molasses. Carbonation lime is used as fertilizer. 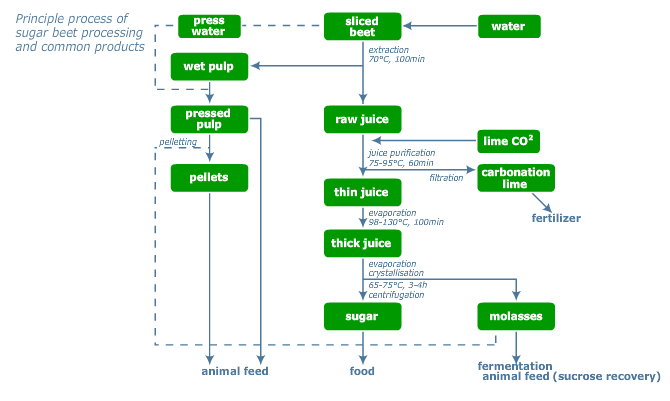 Worldwide about 8,6 million metric tons of DRIED Sugar Beet Pulp (= pellets and shreds) is fed to mainly cattle either as a straight feed or as an ingredient in compound feed.

More than 50% of the entire global supply of dried BPP (approximately 4,5 million metric tons) is produced in less than 100 sugar factories spread over Germany, USA, France and U.K. whereas the total number of sugar mills around the globe is close to 600.

Currently Japan and Morocco are the world’s largest single importing countries of dried BPP, together they have about 1 million tons of import requirements. The supply and demand situation is very much depending upon the “cattle-balance” of each individual country using BPP and the import/export balance is mainly influenced by domestic consumption patterns and the respective infrastructure as well as world market prices.

BPP has a very good reputation especially in cattle rations and there will be new countries importing it in the near future. Despite the most recent EU sugar reform (with a significant cut back on its beet sugar production during 2006-2012) we would expect that the global BPP supply will not be affected that much due to an increasing production in other countries such as Egypt, Russia and Ukraine.

This site uses cookies to store information on your computer. Read more Ok
Go to Top